In the latest installment of 3Din30, our LinkedIn Live series, I had the opportunity to sit down with Kurt Wagner, CEO of Wagner Machine Company. We discussed the experiences and lessons that his shop has learned as it has embraced the design freedom benefits of 3D metal AM to move beyond the limitations of traditional manufacturing and produce parts that were previously considered impossible.

For a little background, Wagner Machine Company is a precision machine shop located in central Illinois. The company provides traditional manufacturing services and has earned a reputation over the years for building highly complex “impossible parts”.

You can watch or listen to the full conversation here and remember to follow VELO3D on LinkedIn for all future episodes of our series.

At VELO3D, we love to showcase the innovative ways organizations use our advanced additive manufacturing technology. Whether that’s in the form of entirely new designs meant to produce maximum performance, or simply adapting AM to improve the agility of the supply chains, the focus is almost always on the finished product.

For this episode of 3Din30, we took a slightly different approach, focusing instead on Wagner Machine Company’s journey from traditional precision machine shop to Metal AM with a knack for creating parts others can’t.

Just how did Wagner accomplish that? “Our company was founded in 1985 by my parents, and we started off with a pretty simple goal, which was to make quality parts for a reasonable price,” explains Wagner. That goal was spurred on by Wagner Machine Company’s location. Being in a university town provided the company with opportunities to take on jobs that may not have been available in other cities.

According to Kurt, WMC’s proximity to the University of Illinois also meant working with many startup companies that were looking to rapidly iterate and, as he recalls, “make parts that people consider impossible or extremely difficult.” It seems that pushing the boundaries of what is manufacturable has been a successful strategy for many companies looking to gain an edge in their industries even before the days of AM.

Wagner wasn’t enthusiastic about metal 3D printing right out of the gate. During our conversation, Kurt wasn’t shy to talk about (and explain) his initial skepticism about the technology.

“My first experience with metal 3D printing was when I was still in high school. I went to the IMTS show in Chicago in 1996, said Wagner. “[Additive Manufacturing] was really cool… it was also something you looked at and said, ‘well, that’s never going to catch on’, and that’s because it was so complicated, inconsistent, and difficult to use. You could hardly imagine an application for it.”

Thankfully for all involved, the engineers at VELO3D “did catch on”, prompting Kurt and Wagner Machine to expand on their capabilities and on their reputation for creating “impossible parts”.

During our LinkedIn live session, Kurt recalled how customer demand played a large role in Wagner Machine Company purchasing their first printer. “We had customers coming to us with parts that they’d printed from other manufacturers, and one of the challenges they always had was it was easy to get somebody to print the part, but then they could never find anybody to finish machining it,” he explained.

Kurt’s retelling of Wagner’s foray in metal AM touched on an important subject that is often overlooked in the AM community; that 3D printing isn’t necessarily meant to be a replacement for traditional machining or machining but is often a complementary process.

Perhaps Kurt summed it up best during our conversation when he said, “In my opinion…it’s all part of the same manufacturing process, and if you don’t take all of the pieces into account, you get yourself into a big mess.”

It’s been a busy year for Wagner Machine Company. While the company has been ITAR registered for a while, Kurt was pleased to inform us that they recently received their IS0 9001 and AS9100 D certifications. “We had several customers that we were doing prototype and low volume limited production runs who were really pushing us for that,” he said.

The conversation then shifted to Wagner’s success and recognition for building impossible parts. I was curious to know how that came to be and once again Kurt explained that customer demand played an important role.

“Way back in the day, when my dad first started, a lot of [demand] was just around small parts or small features,” said Kurt. “There was this job we did where we had to make 1000’s of parts with 3 thou -diameter holes in them. Back in 1984 when we were working on that; that wasn’t a thing that you did. Now, we wouldn’t really blink an eye.”

A proven track record of producing tricky parts is only part of the equation. Kurt also talked about the materials Wagner is printing. He mentioned aluminum F357 being the primary one and acknowledge that working with the aluminum hasn’t been easy due to its reactivity.

“We don’t like doing anything the easy way so of course we would start out with one of the harder things to print,” said Kurt. Going on to add: “There’s also not a lot of people out there [working with this material], so that’s part of the reason we wanted to get into that.”

Despite its reputation for being tricky to work with, Kurt talked at length about the success Wagner has had recently in printing a variety of parts using aluminum F357, such as heat exchangers as well as other parts focused around thermal transfer.

This flexibility to create a broad catalog of parts has also lead Wagner Machine Company to fulfill the needs of many industries, including the aviation, aerospace and even the burgeoning unmanned aerial vehicle (UAV) industry.

“One of the things that I’m hoping we get into is optical systems,” said Kurt. “We do a lot of optomechanical systems right now, and I see an opportunity to combine systems that have a bunch of small, complicated components into one bigger system.”

The conversation then turned to one of the primary benefits of AM: parts consolidation. I asked Kurt his opinion on the topic and what his experience has been specifically from an additive perspective.

“There’s no hiding the fact that additive in general is not a particularly cheap way to make parts,” he said. “But one of the ways that you can justify the cost is taking what used to be 10 or 15 parts, or even two or three parts, and combining them into one more complicated part.”

On “impossible parts” being a niche market or a growing one

Naturally, there was a lot of talk during the session about impossible parts. It’s something we talk a lot about at VELO3D: the ability to print challenging parts in a manner other AM technology can’t.

I asked Kurt whether he felt this market was niche or whether there were encouraging signs that it’s growing.

The team at VELO3D is excited to continue the 3Din30 series to interact with those who have questions about the metal additive manufacturing world, and the part VELO3D plays in driving innovation.

Follow us on LinkedIn to be the first to know about all our exciting upcoming events!

Experts discuss some of the barriers preventing trust in metal AM, and how the industry can adopt additive in a more... 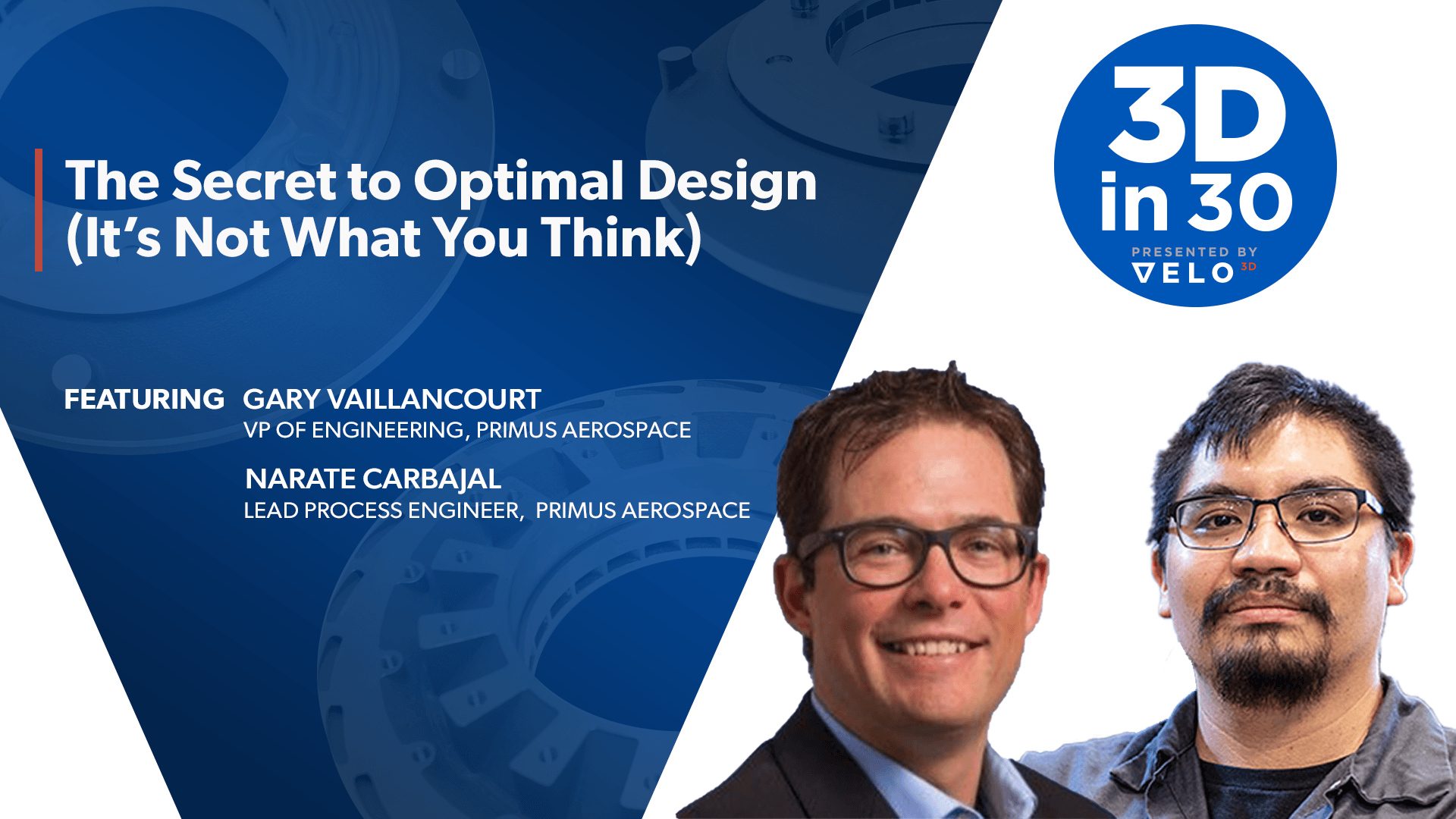 3Din30 Episode 4: The Secret to Optimal Design in Metal AM

We discuss how Additive Manufacturing (3D Printing) can unlock performance with an unprecedented freedom of design... 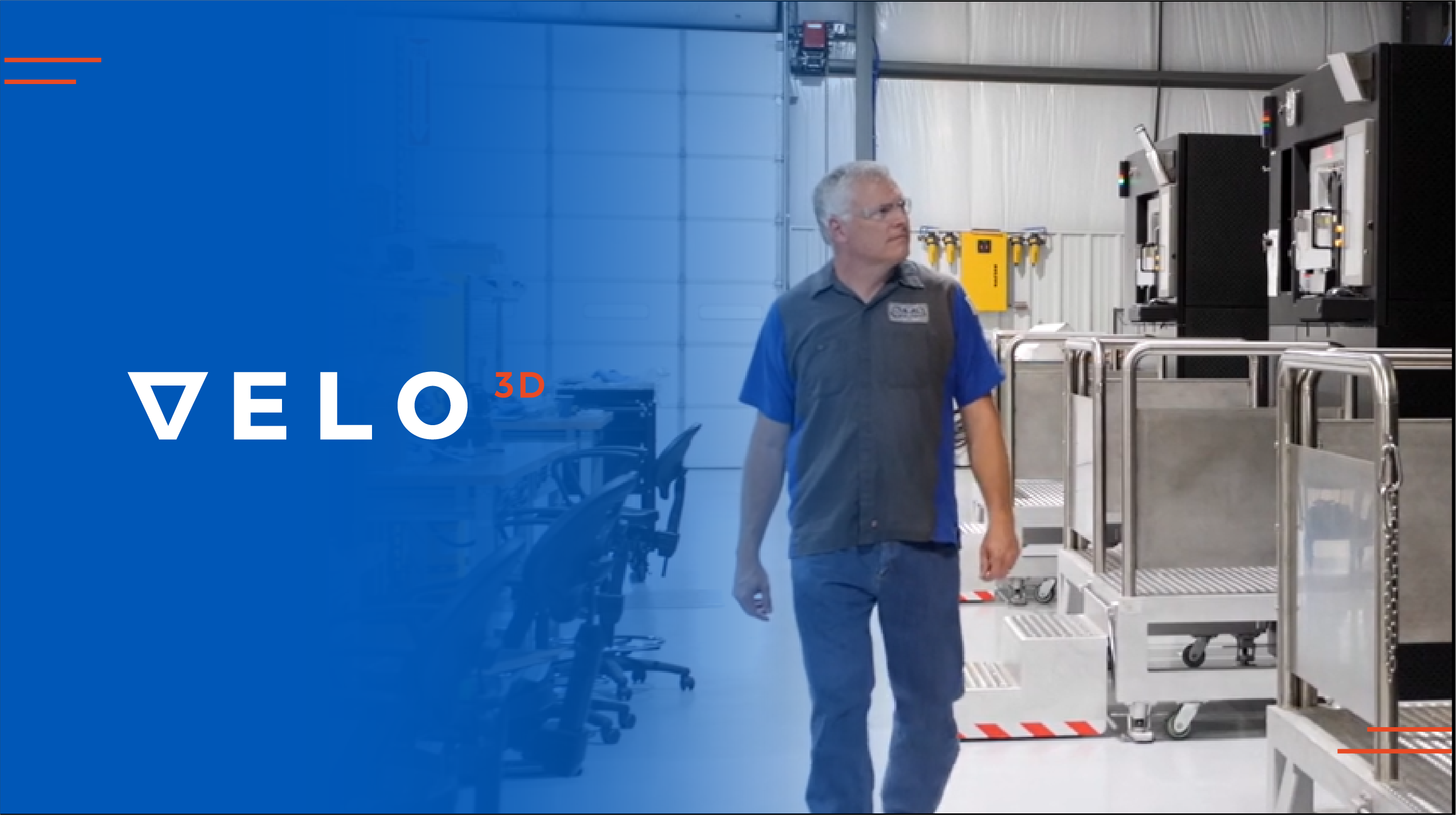