It’s often easy to look at a company from the outside and understand what it’s trying to accomplish or the challenges it’s trying to solve for customers. But it can be much harder to pull back the curtain and get a real look the people behind all the innovation and hard work; the people who have dedicated their careers to solving some of the manufacturing industry’s most complex problems.

Greg Brown is one such problem-solver. As Velo3D’s VP of Technology, it falls on him and his team to overcome industry challenges old and new.

I recently chatted with Greg about his impressive academic credentials, his background in material science, and what led him to join Velo3D (slight spoiler alert: he loves solving complex problems).

Hi Greg, can you please tell us about your academic and professional journey?

I did my undergrad at Case Western Reserve University in material science. Then I got my PhD from UC Berkeley. That was right around the time of the big green energy VC boom in the valley, so I joined a thin film solar company called Nanosolar. I was very passionate about getting into renewable energy and helping to bring the cost of solar down. I joined that company, but they ultimately went out of business. Then I went over to a competitor of theirs called MiaSolé who were doing something very similar. I went there for a bit, but then decided to move on.

Did you remain in renewable energy?

No, I ended up at Applied Materials. They are a semiconductor capital equipment company. I liked the business model they had and how challenging some of the technical problems they were working on were. Ultimately, it was a very mature industry, and there were only so many suppliers, so many competitors, and so it wasn’t that fast paced. It was a lot of customer relations more than solving fundamentally new problems. So, that wasn’t quite right for me. I wanted to go back to doing something earlier stage, so I went to a company called Kinestral. They do electrochromic windows. It was nice because there were major problems we had to solve before we could bring a product to market. Ultimately, they also had similar issues compared to solar, where it was expensive to scale that type of technology.

What eventually brought you to Velo3D?

I had a friend who I worked with at Berkeley and Nanosolar and at Applied Materials, and he got hired to be the head of process at [Velo3D]. Right after he got the job, he called me and said, “Hey, can you come over here and help?” I was very interested because it was the best of both worlds; it was a small company working on an emerging technology that still had a lot of fun fundamental problems that needed solving. But it had a mature business model where you can make money on the first thing you make. I liked that it seemed to hit the sweet spot of fun, exciting, and challenging things to work on, but with a business model that I thought had a reasonable chance to scale. That was five and a half years ago at this point and I’m still here!

You mentioned this a few times—that you really like solving new problems. Why do you think solving problems is so important to you?

I mean, it’s just kind of what I enjoy doing! It gives me a sort of personal satisfaction. I like to use my head, especially if there’s a hard problem that someone can take value out of and benefit from. I get very motivated by that.

Did you have any additive manufacturing experience before joining Velo3D?

Applied Materials is semiconductor manufacturing, but the closest thing was at Case Western in the materials science department. There was a heavy metallurgy focus there. A lot of my undergrad was heavily focused on metallurgy. But then once I left undergrad, I went to Berkeley, and it was all semiconductors. Then it was all photovoltaics and then electrochromic windows. They’re not semiconductors, but it’s not too far away from it. It’s electrochemistry. So, coming [to Velo3D] was really a return to stuff that I had not worked on in a while.

Is there any similarity between the semiconductor and additive manufacturing industry?

Absolutely, the machines follow a very similar process flow. Even the build plates that we use happen to be the almost the exact same size as a silicon wafer. It’s similar in many ways. In a semiconductor fab, you take a single wafer, and you run it through three to 500 different machines to basically pattern your circuit and ultimately make the product. In our case, you put our build plate, which is like the wafer, into our machine. But instead of going through three to 500 different things, it does 5,000 layers. We do all the same processes, but it’s all on one machine. But like in semiconductor, if you’re going through 500 different steps and you screw up on any single step, the product is dead. The stakes are high, so it requires similar levels of metrology and process control.

What’s the difference between metrology and process control?

The main thing on process is that a lot of it comes down to the process parameters, which are the things you are inputting into the system to try to get your desired outcome. A huge focus of process engineering in general is what’s called process windows. This roughly equates to how wide of a range on input parameters do I have before I have some sort of failure mode happen. If I’m too far off in laser power the part become porous, and non-mechanically strong. And likewise, something else happens in the other direction. So, process is all about coming up with a way to make the part for the end customer in a robust enough way that it can handle sort of the inherent non-uniformities associated with hardware, software, and just life in general, where things don’t stay constant all the time. You need to make sure that what you’ve designed basically works within the tolerances of the machine that you’re trying to print it on.

Metrology is more like analyzing what happens. Where is the part? What was the temperature of the part when you did this? And what was the position of the part?  It’s related to the sensors that are on the system. They play very closely together, but they’re kind of two separate aspects. We rely entirely on the metrology to know whether we’re doing our jobs properly, so there’s always work on having better metrology.

Tell us more about your role and your day-to-day at Velo3D.

At the beginning, a lot of it was solving a very specific set of challenges. There are these parts that people want to make. There’s this conventional process that laser additive manufacturing does. And with that process, it’s not possible to make these parts. So, the question was, how do you change the process, the hardware, the printer, or the software, whatever it is, how do you change all of that to make the parts that customers want? At the beginning, it was rapid experimentation. I would come up with a hypothesis for why things fail in different ways, come up with experiments, run the experiment, analyze it, rapidly iterate like that, and just crank through learning cycles as fast as possible. Half of my job is working on how to expand upon the base that we already have and then figuring out what we can improve.

We talked about problem solving but what else motivates you to come to work at Velo3D every day?

I really like the people here. That’s a big part of it. Whether or not you really enjoy your job depends a lot on who you work with, and whether they’re motivated by similar things. The people here also like solving problems. There’s a lot of smart people here, and a lot of them have expertise in areas that just I don’t have. So, I really love learning new things from my colleagues.

What in your opinion differentiates Velo3D from other additive manufacturing solutions?

I think there are two sides. There’s the SupportFree™ process, the ability to build parts that others can’t build, which is very real. A lot of the parts that we’ve gotten adoption on are parts that can’t be printed or made in other ways. Being able to develop that new technology really has allowed the leading space companies, for example, to take what would have been thousands of different parts in this complicated assembly and produce a much higher performance product that’s all integrated using our technologies. That is a big differentiator.

But I think the second part, that is harder to quantify, is the speed of innovation and the desire to solve some of the industry’s fundamental problems—and not just kick the can down the road and be complacent with the current level of technology. If there’s a real problem, we’re going to come up with a solution, the fact that everyone else suffers from the same problem is not a good excuse.

One big problem that everyone’s struggled with for a while was how to use multiple lasers to make a single individual part. There are very crude solutions to that in the industry that didn’t work very well. No one was really invested in trying to come up with a real solution. Instead, we were like, “what are the real problems here, how do we actually solve it?” And we came up with this great scheme that’s based off this metrology that we have in our system. Now you can’t even tell the difference on a part when using one or many layers because they’re just perfectly overlapping each other. That’s just one of many examples, but when you stack them all on top of each other, you quickly realize there’s just a lot of things better about our [Sapphire® printer].

What’s something that most people don’t know about you?

My father was a banker and was assigned overseas, so I grew up in Korea, Japan, and Australia. I didn’t really come back to the US until college. Looking back, it was a great way to spend childhood.

I spend a lot of time with my family. I’m married, and I’ve got two daughters who are eight and six, and they’re just tons of fun. I like playing video games with my oldest daughter, and I’m starting to get her into that. I’ve also recently started taking up a mountain biking. Previously, I had been doing biking for exercise, and now I’m getting into mountain biking as well. 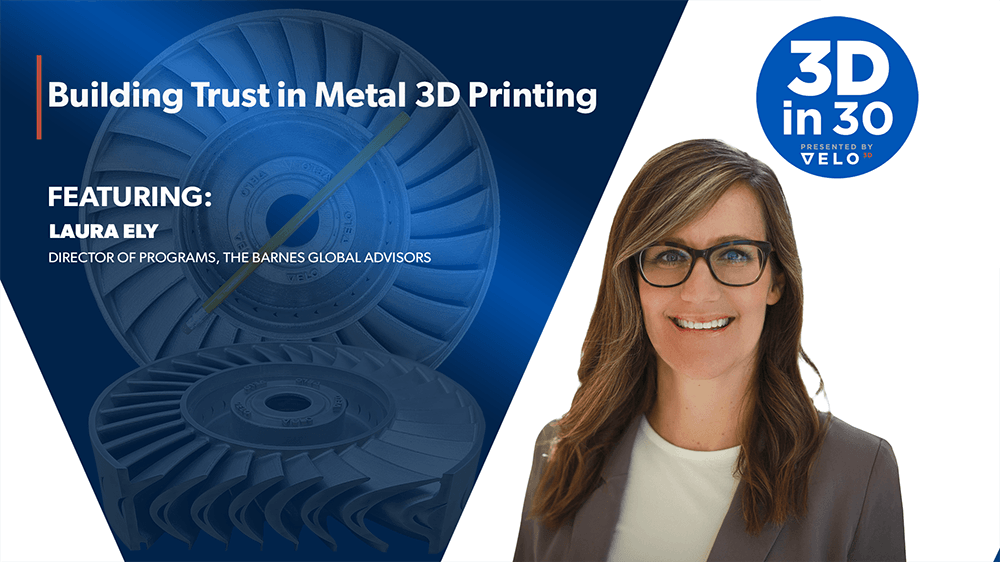 “Engineers don’t use parts that they don’t trust” How do we build that trust? This is the topic of this...

How Velo3D and Ansys are Enabling the Future of Static Mixers

Learn how Velo3D SupportFree™ metal additive manufacturing technology and Ansys software are creating the next... 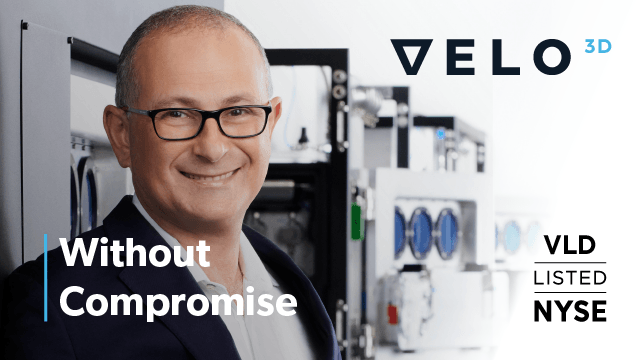 Velo3D represents a paradigm shift that optimizes every aspect of complex, high-value parts manufacturing by giving...